“Spinster: Making a Life of One’s Own” (Crown 2015), Kate Bolick’s adult memoir should be read by all women, but in 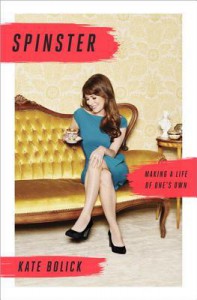 particular, by young adult women. There are so many points to ponder and discuss.

About young adulthood, Bolick says: “When we “invented” adolescence as a sociological and developmental category in the 1950s, we robbed it of dignity, turning teenagers into a faceless mob of deranged hormones. In fact, it’s a noble and brave and terrible time . . .” And the perfect time to think about one’s future.

The word spinster once meant a woman who spun woolen thread as an occupation; in 1890 it has meant prostitute; and presently it has strong emotional connotations—usually derogatory—of a woman who can’t find herself a husband. In another feminist cultural history, “Writing a Woman’s Life” (Ballantine 1989), Carolyn Heilbrun calls an unmarried woman an “ambiguous” woman—one who chooses not to center her life on a man. Bolick prefers “spinster” feeling that its connotations are undeserved and “spinster” ought to be viewed as a destination.

“Spinster” begins: “Whom to marry, and when will it happen—these two questions define every woman’s existence, regardless of where she was raised or what religion she does or doesn’t practice.” This did not ring familiar to me, so I asked around and was told a myriad of experiences—all very interesting. Whereas the opening premise might not hold true, it’s a good starting point. What Bolick is getting at is that women generally see themselves in relation to men—and marriage.

All but the Irish Brennan came of age, roughly, between 1880 and 1920, a time which may have been “the single woman’s most glorious moment yet.” Women had struggled for suffrage, and upon achieving the vote in 1920, their mission petered out. Interesting.

Bolick entitles one chapter, “Are women people yet?” Looking through the lens of the five awakeners and their century-old but familiar-enough-to-be-contemporary experience, the author asks about a woman’s life. Does she control her life? We are reminded that having children is a choice. Women must be people first, and women second.

Bolick has several landmark thoughts concerning her own marrying. When in college, she assumed she’d marry by thirty, giving her time “to learn about the world before settling down.” To not do so, “would require a very good explanation, which I certainly didn’t have.” However, when she reached thirty, she wasn’t ready. Now she is forty something and still a spinster and intends to stay so, although she is presently in love with a man.

The book ends with a quote from a Mary Oliver’s poem: “Tell me, what is it you plan to do/ with your one wild and precious life?” Good question.