In the city of Rosario, Argentina, Camila Hassan has the talent and drive to be a fútbol star, but her parents believe in the old social order 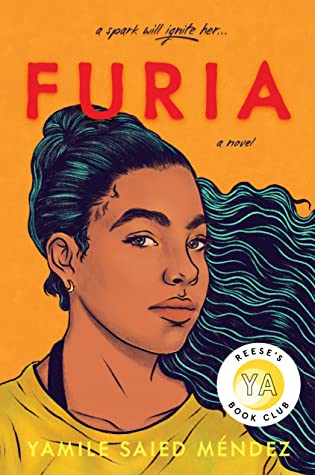 where here is no place for a girl athlete. Camila lives a double life keeping her fútbol on the field with her teammates, who call her La Furia—the fury—and a secret from everyone else. “Furia” (Algonquin 2020) by Yamile Saied Méndez is a Reese Witherspoon Young Adult Book Club selection as well as the 2021 Pura Belpre YA Medalist—the Latinx literary award.

Camila’s ragtag but talented and passionate team qualifies for the South American tournament, but she cannot continue without the consent—and knowledge—of her parents. Her brother Pablo—less talented, less driven than she—is being groomed to be a soccer star by her father. Her brother’s friend Diego has soared to soccer fame, playing on the Italian team Juventus.

Diego visits home and seeks out Camila. They renew a childhood crush. Diego would like to rescue Camila—take her to Italy with him. Even he realize the star player she has become. Diego is every girl’s dream of a boyfriend and Camila loves Diego but she will not give up her dream for his. If her team plays at the South American tournament, a scout could see her and she might be offered a scholarship at a North American university.

The close bond between the girls on their team brings up the cultural taboo of girls hugging each other—even in a country that allows same-sex marriage. The issue of domestic abuse is also an issue in this story. Sexism looms huge. The story gives us a view of Argentine culture from many angles.

Camila’s mom married an aspiring but “failed” fútbol star and the marriage is a disaster. Mom, of course, worries about her daughter when rumors fly about her and Diego. Mom tells Camila, “Lies have short legs, guapa. Don’t forget, or you won’t run.” Great bit of wisdom, especially for those in the midst of teen culture, where gossip abounds.

Her parents think that Camila’s intelligence and ability to speak English will be what releases her from a world of poverty, but Camila is banking on fútbol stardom. However it is her English and compassion that get her a job teaching orphans at a parochial school where she becomes mentor to many, particularly one pre-teen girl. Somehow all these social issues work into one story.

Coach Alicia says to her team, “Daring to play in this tournament is a rebellion, chicas. Not too long ago, playing fútbol was forbidden to women by law.” It reminds me of the days before our own Title IX, when my big sister couldn’t play Little League even though she was a star player.

Globally we’ve come a long way, but we have so much further to go.