In 1975 Saigon, ten-year-old Hà, wakes before dawn on Têt, the Vietnamese New Year, and taps the floor with her toe. A boy is supposed to wake first to touch and bless the house. Never a girl. Hà says, “…only male feet can bring luck. An old angry knot expanded in my throat.” What if her act of defiance has spoiled the family’s luck. Because what happens next is devastating. War-torn Saigon falls to the enemy—to North Vietnam.

So begins “Inside Out and Back Again” by Thanhha Lai (Harper 2011), winner of the National Book Award for Young People. Written in prose poems, it is succinct and fast-paced. 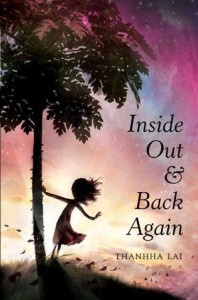 Years ago, Hà’s father disappeared, undoubtedly taken by the North Vietnamese. But on this day, when the capitol is in chaos, her mother manages to escape with Hà and her three brothers to an overcrowded refugee boat at the river. They drift to the sea without being apprehended by the enemy, but no one arrives to rescue them. Finally, after days of hunger and dehydration on the open seas, an American ship rescues them.

In spite of speaking no English, the family starts over again in Alabama with the help of their sponsor who Hà calls “our cowboy”. He wears a cowboy hat, boots, but has no horse–a sore disappointment to Hà. But he’s kind, although his wife isn’t. Neither are the neighbors. They throw eggs, then a brick through the window.

The cowboy encourages the family to join the Baptist church in order to be accepted by the community. Mother says one religion is like another, so they all get baptized, attend church, but continue to chant before their Buddhist altar at home. Why not.

Unable to speak English at school, Hà is considered stupid. When her tormentor, Pink Boy, cannot multiply 18 x 42, Hà marches to the board and makes the calculation in five easy strokes. This of course makes life even worse for Hà. Not only do they taunt her with ha-ha-ha, but Pink Boy and gang corner her, ready to attack.

Having anticipated this, Hà’s big brother approaches on a motorcycle as planned. Saved. By this time, Hà has befriended a red-haired girl and a boy the “color of coconut shell”. Wise Mrs. Washington, a neighbor and retired teacher tutors Hà in more than just English.

Sparely written, this autobiographical story of assimilation is a must-read.