This is the first of the middle grade book reviews I will be writing for our newspaper in Champaign Urbana–the News Gazette. This ran Sunday, April 10, 2011 and a new review will run once every three weeks. 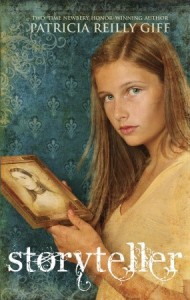 ATTENTION, MIDDLE GRADERS (yes, you — let’s say third- or fourth- through seventh-graders): Every third Sunday, this book column is for YOU to read.

I was immediately attracted to the book “Storyteller” (Wendy Lamb Books 2010) by Patricia Reilly Giff because I’m a storyteller. What could this story tell me about myself? Isn’t that one reason we read? To find out about ourselves and our world?

Elizabeth is sent away from everything familiar — her father, home, friends, school — to live with Aunt Libby in upstate New York so that Pop can work in Australia for a time. To make things worse, she’s plunked into a new school in the middle of the year.

At Aunt Libby’s house, Elizabeth is attracted to an old framed drawing of Zee, who looks oddly like her. Elizabeth starts asking quiet Aunt Libby, her deceased mother’s sister, about this familiar-looking relative who lived in the 18th century during the War for Independence.

Zee tells the story of her Patriot family, farming on the New York frontier. Those loyal to the British king (called Loyalists) were her friends and neighbors until they burned down her house and farm. Zee, 15, had to flee into the woods, leaving her mother behind.

We the readers, have the privilege of hearing Zee, who has seriously burned her hands, describe her barefoot journey through the forest and mountains northward in search of her brother and father, who she thinks are fighting at Fort Dayton for American freedom.

Alternately, Elizabeth has only the drawing, her imagination and research to patch together Zee’s story. We experience the horrors of war, but thankfully, without graphic sensationalism.

Readers will connect with the more familiar plight of Elizabeth’s loneliness, but they’ll be riveted by the life-and-death adventure of Zee.

As Elizabeth uncovers her family history, she and others realize she’s a storyteller. What Elizabeth finds in an antique shop allows us to see the outcome of Zee’s life, just as Elizabeth discovers the truth herself.