His name is Castle Crenshaw, but he calls himself Ghost. He’s been running ever since his drunk father came after him and 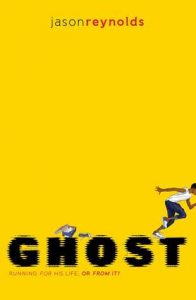 his mother with a gun, aiming to kill, in the book, “Ghost” (Atheneum 2016), by Jason Reynolds. So now Ghost lives with his mom, his dad’s in jail, and Ghost is running from himself, getting into trouble at school until his crazy fast running takes him through the track field where Coach spots him.

Coach has a passion for helping troubled kids who have track talent. He was an Olympic Medalist, himself, until he screwed up by taking drugs. He doesn’t want this to happen to Lu, Patina, Sunny. Or Ghost. All these kids are troubled. All are terrific characters—both male and female—on this city team.

But can Ghost stay the game? He sure messes up a lot and Coach doesn’t tolerate that. Ghost has natural talent, but he needs training and Coach is the guy to train him. The team is aiming for a shot at the Junior Olympics. In order to get his “newbies” to bond, Coach takes them out for Chinese food. Before they can dig in, they must each tell a secret about themselves. I wish I could tell their secrets, but that would be a super-spoiler. But you know Ghost’s because it starts the story. And having told the others, he’s part of something. They’ve bonded. Ghost says, “Like I was there—really, really there—as me, but without as much scream inside.”

The characters are authentic. The story is authentic. This book really needs to be put in the hands of thousands of young readers. Whereas Ghost is a middle school student, older kids will enjoy this gritty, emotionally honest book. And it’s a fast read at only 180 pages. It’s already a best seller, was a finalist for the National Book Award, and just won the 2017 Charlotte Huck Award from the National Council of Teachers of English (NCTE). Reynolds is the man of the moment, an African American man writing from in his culture.

I had the honor of being a panelist alongside Jason at the NCTE Conference last month in Atlanta. He said something like, “It means the world to me to share stories about people and families and neighborhoods that not everyone knows, or even considers. My job is to try to peel away some of the layers and walls to expose the humanness and the connectivity in us all.”

And he’s doing that so well.