The Cuban Missile Crisis of 1962 was averted—just barely. But in Todd Strasser’s “Fallout” (Candlewick 2013) the attack takes place. 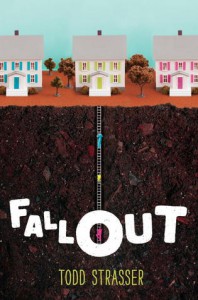 The story opens before dawn with Scott’s family climbing down into their bomb shelter. There’s a struggle when desperate neighbors try to push their way in. Scott’s mother falls to the concrete floor, is knocked unconscious and is bleeding.

Brief chapters alternate between life in the bunker and Scott’s friendship with fellow seventh grader Ronnie—before the attack. Scott and Ronnie steal a Sara Lee cheesecake from classmate Paula’s garage freezer. Terrified by his father’s wrath, and humiliated, Scott must apologize to the offended family in front of Paula.

The neighbors had ridiculed Scott’s dad for building the shelter, but Ronnie and his parents, as well as Paula and her father have muscled their way in. The fathers manage to bolt the iron door shut against all other neighbors. Along with the maid, Janet, and Scott’s family, there are a total of ten people living in a small bunker with supplies for four. They’re scared and angry and due to the early morning hour, still in their pajamas.

In the pre-attack chapters, Scott thinks he has problems, but oh how trivial they’ve become. The juxtaposition of the two worlds—before the missile attack and after—is intentionally jarring.

The survivors must remain in the bunker for two weeks before radiation levels will be acceptable “up above.” They have a flashlight and batteries, but no watch. No one knows how much time has passed. The water tank should have been filled in preparation but it wasn’t. Scott’s dad is criticized by the adults. Food is extremely rationed. Tempers are short.

Janet bandages Scott’s mother’s head with torn sheets. She is rolled frequently to protect against bedsores, but she remains unconscious. The other nine take turns sleeping on the three beds. They’re tearing off and using up their pajamas for washcloths and rags, once the toilet paper runs out. The adults argue about everything—including what they will find “up above,” if they survive. This is new to Scott—seeing adults (other than his parents) bicker.

Through the alternating chapters of backstory we get to know each of the characters and see how a normal-life characteristic becomes intensified and manifested in a survival bunker with nine other people. Once they solve the water issue, hunger might be the most immediate problem as they get weaker and weaker. Some members feel they should get rid of the maimed. As shocking as this is, it seems real. Survival of the fittest isn’t pretty.

Because this is a young adult novel, I know there must be hope at the end, but I’m having a hard time imagining how the author will carry this out. But he does. At the end you feel relief, even a sense of joy.