Everything is going wrong for David Greenberg. Entering Harman Middle School is hideous. His best friend Elliott befriends the guy who has always bullied them both. His mother left the family two years ago. But David finds comfort in his own talk show, “TalkTime” modeled after his idol Jon 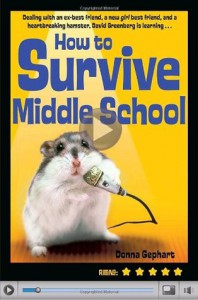 Stewart and “The Daily Show.” Thus begins “How to Survive Middle School” by Donna Gephart (Delacorte 2010).

David has much in common with Jon Stewart. They’re both Jewish and both vertically challenged, not to mention, they both have talk shows. David films in his bedroom, sharing camera time with his hamster, Hammy. Because his former best friend, Elliott, doesn’t show up, David must be writer, cameraman, editor, interviewer, and interviewee of his film production.

David interviews Magazine Cover Jon (Stewart). David reports, “This is tough because though I’m a guy, my voice hasn’t quite caught on yet.” His voice could crack at any moment. Still David asks Jon, did you really play French horn in school? Magazine Cover Jon responds, “That’s right, David. For viewers who don’t know what the French horn is, it’s a large shiny girl repellent.” Alas, David’s voice squeaks mid-joke.

Camera rolling, David barges into big sister Lindsey’s room to find her face covered in zit-cream. Lindsey rants in a fury. David retaliates by using the footage in “TalkTime,” saying “Today’s acne forecast is cloudy with a chance of blackheads.” Okay, cruel, but funny.

David and Lindsey, united in grief over their absent mother, eventually work things out between themselves. 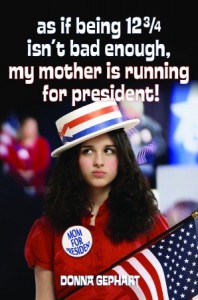 Thank heavens for classmate Sophie, who was formerly home-schooled. When she and David are paired to do a science project together, she discovers David’s “TalkTime” posted on YouTube. She gets the word out to her home-school network, and overnight David becomes a YouTube sensation. This brings more perks to David’s life.

However, his classmates haven’t quite caught on yet, how cool this kid is, but the reader surely will. I wish I’d gone to school with him.

David Greenberg is  funny. That is to say the author Donna Gephart is a riot. Her previous book, “As If Being 12 ¾ Isn’t Bad Enough, My Mother is Running for President” (Delacorte 2008) won the Sid Fleischman Humor Award in 2009. She has another book forthcoming from Delacorte, so keep your eyes peeled for that one, too.