Affable Adam, a senior, appears to have a perfect life. Maybe he’s a little wired, but he’s lovable, affable, and he’s everyone’s 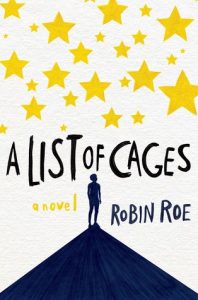 friend. His Mom deals with his ADHD with homeopathic drops so he’s on no hard medications. His elective is perfect—he’s the aide to the school psychologist in Robin Roe’s debut novel “A List of Cages” (Hyperion 2017).

Adam’s first assignment is to deliver the elusive freshman, Julian, to counseling. Julian turns out to be the kid that Adam tutored in reading when he was ten and Julian was five.

Then two years later, Julian’s parents both die and Adam’s family fostered him. That fostering ended badly. On every page you wonder why.

Julian is still sweet, he writes stories like he used to—but he’s quiet now. He disappears at school, is never seen at lunch. He’s keeping secrets.

We follow Adam with his lively group of close friends. Alternately, we follow Julian into the theater, into the fly area, over a gap, through some loose boards and into his hidden space. And boy, does this kid have a lot to hide from.

Julian is meek and broken like a whipped puppy. He lives with his Uncle Russell now, but Russell is gone for days on end. Whereas that’s lonely, it’s worse when Russell arrives home. Julian had cleaned his grimy shoes with something he found under the sink and left a bleach mark on Russell’s beautiful wooden floors. Russell accuses Julian of being spoiled. Sensitive Julian hears “spoiled like old meat”—“no-good garbage.” Just like Julian “spoiled” his bedroom when he put up a poster the first day he’d arrived, some years ago.

Russell whips Julian with a willow switch. He leaves scars but his ill-fitting clothing hides the marks and Russell has arranged Julian not to take PE. So why is Russell’s house beautiful, pristine, expensive, while Julian wears too-small filthy clothes? Adam sees that something is amiss. As a reader, I got so immersed in Julian’s pain it was sometimes hard to leave him and transfer to Adam.

Julian says about the school psychologist: “She’s being nice, but it just makes me more nervous because she expects me to tell her things so personal that they need to be confidential.” Playing SORRY! is too cruel a game for Julian because the SORRY! card means you kill off your opponent’s people. Who would want to do that?

About missing his parents: “You miss the things they did and who they were, but you also miss who you were to them . . . When you know you’re going to tell someone everything, you see your day through your eyes and theirs, as if they’re living it alongside you . . . But when you don’t, it isn’t only not seeing double—it’s not seeing at all. Because if they aren’t there, you aren’t either.”

Robin Roe counsels troubled teens and you know this is real. You will love both Adam and Julian and rejoice in their friendship.