Ruta Sepetys writes books for teens and adults about “hidden chapters of history.” That perfectly describes her latest, “Sal 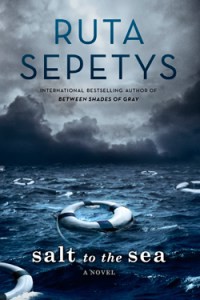 t to the Sea” (Philomel 2016). Set in Germany at the end of World War II, citizens flee Germany, while Russian forces invade from the east, Allied forces approach from the west, and bombs occasionally rain down from above. On top of that, the refugees are fighting a severe winter. Each character has his own pain, which is uncovered gradually throughout their flight toward (what the reader knows is) a doomed evacuating ship.

The narration is shared by four teenagers, three of whom are refugees. Joana, a lonely Lithuanian nurse, is burdened with guilt. Florian, a secretive Prussian boy, worked under Nazi patronage, restoring art. Emilia is a pregnant Polish girl. Then there is a blind girl, Ingrid, who senses approaching danger; an older man they call the Shoe Poet, due to his philosophical pronouncements about life; and a six year old orphan boy who has wandered alone until he meets the group. There is tall Eva, “a giantess” who complains about everything.

The fourth narrator, a young Nazi soldier, Alfred, prepares the ship, the Gustloff, for the rescue mission. Alfred composes a love letter to Hannelore, describing his grandeur and power, when he is interrupted by an officer who orders him to swab out the toilets. The author expertly unfolds the mystery of this boy with delusions of grandeur. We see him building power, building danger, just one of the many threads that pull us along this breathtaking story.

The refugees spend nights in barns, huddled together. They find a deserted mansion one night, but the windows are smashed out. They discover evidence of a grizzly incident that has unfolded upstairs, forcing them to move on quickly. A passage of ocean inlet must be crossed at night when the severe cold freezes it over. As they walk, Emilia describes, “The ice ached and groaned, like old bones carrying too many years, brittle and threatening to snap at any moment.” Who will survive and who will not?

We wonder what precious art item Florian is harboring and why. What has Joana done to feel such guilt? The two are falling in love, but they hold such deep secrets. Is the father of Emilia’s baby really her boyfriend?

The group arrives and finds the German harbor in chaos. Thousands of refugees need passage, but wounded soldiers are boarded first and one’s passage must be finagled. A nurse, a young boy who needs his “grandfather,” and a pregnant girl might manage. But the pregnant girl is Polish. A boy who can forge his papers might get on.

Those who board have more tragedy to endure. The Gustloff is torpedoed and goes down fast. Whereas the book is fiction, the incidents are real. Nine thousand out of the ten thousand people crammed on the boat meant for two thousand, perished. Many were children.

This is a great read for young adults as well as adults.