Loving vs. Virginia is an informational book or a “documentary novel.” The story is told in 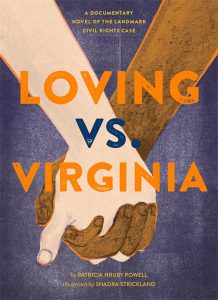 verse in the voices of Mildred Jeter (African American and Indian) and Richard Loving (white). The couple grew up together, fell in love, married in Washington DC, came home to Virginia in 1958 and were arrested in bed. It’s hard to believe that less than 60 years ago interracial marriage was illegal in half of the United States.

Research included my watching Nancy Biurski’s documentary, The Loving Story, repeatedly. I viewed news clips, studied Hope Ryden’s 1960s film footage of the Lovings, read newspaper and magazine articles contemporary to the times. I read extensively about the convoluted court case that led to the U.S. Supreme Court. I searched for photos and quotes. But, perhaps the most fun, was interviewing the “players” of my story.

Sadly, both Richard and Mildred Loving are deceased—Mildred in 2008, and Richard only nine years after the U.S. Supreme decision of 1967 which ruled in their favor. But I did speak extensively to Mildred’s brothers Lewis Jeter and to Otha Jeter who still lives in the neighborhood in Caroline County where they all grew up together. Their neighborhood—or section—was remarkably integrated. Blacks, whites, and Indians worked other, partied together, and in some cases, fell in love. This took place in a state, so segregated that State Statistician Walter

Plecker instated the “Racial Integrity Act,” as a health bulletin (!) declaring that interracial marriage was illegal.

One of my favorite interviews was with Richard’s friend, Ray Green. He and five buddies stood around a pick up truck outside a rural convenience store with my husband and me and chatted about their friends, the Lovings. They told stories, laughed, and gave details that would be the foundation of scenes in my book.

My husband, being a white southern man, had special insight into Richard. Studying Richard in film clips and reading his words from previous interviews was essential in recreating his character. As many note, he looked like the quintessential red-neck—one who would be bigoted. Clearly he was not, and I got to establish that, showing his love and stubbornness.

From the clips, I know Mildred was soft spoken, a gentle mother to their three children,

and altogether charming. The couple was clearly in love. They did not want to be the center of this important civil rights issue. They just wanted to live their quiet lives together—at home in Caroline County.

Please ask me any questions. I’d be happy to answer them; or make a new blog post about what might be interesting to be known. And please 1)leave a comment and 2)sign up for the posts if you want a free advance copy of Loving vs. Virginia. The second drawing will be just before Thanksgiving. The third, before Christmas.