On July 13, 2013, Alica Garza—a young activist—was stunned when George Zimmerman was acquitted of the crime of murdering 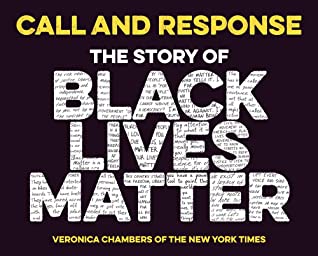 Trayvon Martin, an unarmed Black teenager. In her grief, Garza posted on FaceBook, “Black People. I love you. I love us. Our Lives Matter.” In the meantime, Opal Tometti and Patrisse Cullors—two more young Black activists—had joined voices with Garza. Cullors shared Garza’s post and added the hashtag #blacklivesmatter. The slogan caught on and the global protest movement, Black Lives Matter, was born.

Veronica Chambers with Jennifer Harlan has created a remarkable coffee table book, “Call and Response: The Story of Black Lives Matter” (Versify/HMH 2021), which outlines not only the history of a movement, but the history of our nation. The book is packed with photos, passionate text, and is a guide on how to protest injustice.

About Garza, Tometti, and Cullors, author Chambers writes “They started out as three young girls who cared deeply about their communities and about doing their part to make those communities safer, more just, and more equitable for all.” Each woman began her activism as a pre-teen and each continues to focus her work on Black Lives Matter today.

A year after Zimmerman’s acquittal in Florida, Michael Brown was murdered by a police officer in Ferguson, Missouri. Many of us grieved deeply. All the while, awareness of the tragedy heightened. Protests bloomed nationwide under the banner, Black Lives Matter. Chambers writes, “Black Lives Matter picked up a baton that had been passed from generation to generation of Americans working, often through protest, for racial justice.” And “[a] generation of young activists emerged—finding friendship, strength, a common goal, and the first glimpse of how powerful they could be when they stood up, marched, and shared on social media what they saw and heard.”

Some individuals have joined BLM protests and become media sensation overnight. Young and old are drawn to the boots-on-the-ground experiences that protestors describe on Twitter—such as what it feels like to be tear-gassed. With the senseless murder of George Floyd in Minnesota, protests flourished across the country in June of 2020, while we were in pandemic lock down mode. We could focus on this recurring tragedy—the murder of Black people.

Art—specifically murals—as well as music—first spirituals, then blues, then protest songs—have been instrumental in drawing people together for the hard work of resistance rooted in hope. From pages 55-65 there is a valuable photographic timeline starting in 1954 with Brown vs. Board of Education and working to the present.

The grassroots BLM movement has been almost exclusively a peaceful movement—on the part of the protestors—where young participants are educated by experience. So many activists have braided their threads into the narrative of BLM—threads that began before our country was born. This book outlines the systemic racism on which our country is built.

Chambers offers examples of how to affect change, whether it’s frontline protesting, becoming street medics, suppliers, or observers. This is a must-have book if you care about justice and equality in our world.

Patricia Hruby Powell is the author of the award-winning books: Lift As You Climb: The Story of Ella Baker; Josephine; Loving vs Virginia; and Struttin’ With Some Barbecue.  Books forthcoming are about women’s suffrage, Martha Graham, and Ella Fitzgerald. talesforallages.com