In a small Appalachian town, Cash has lost his mother to the opioid crisis. His best friend, Delaney, has a mother who appears to 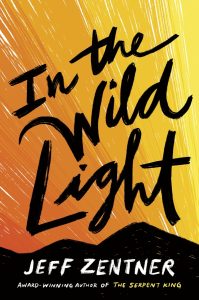 be losing the opioid battle. She has no concern for her daughter.  But the two teens have met at a Narateen meeting and became immediate friends in Jeff Zentner’s “In the Wild Light” (Crown 2021).

Thank heavens for Cash’s grandparents, Papaw and Mamaw who love them both. Delaney is no ordinary girl. She is being pursued by the press for having discovered a mold in a cave that acts as a powerful penicillin. She credits Cash as being co-discoverer, but he knows he only paddled her into the cave in his canoe. He loves the backwoods. And he loves his grandparents. Unfortunately, Papaw has emphysema and is being kept alive with an oxygen tank. Mamaw is manager of a Caesar’s Pizza and brings home a pizza every night for their dinner. These people are living hand to mouth.

Delaney is offered a scholarship to an expensive STEM high school, Middleford, in Connecticut, but how can she go alone? It’s too intimidating. Even in Sawyer, Tennessee, she’s a misfit. This ivy league prep school would be impossible. But she gets a scholarship offer for herself and for Cash as her co-discoverer. But how can Cash leave his failing Papaw?

Papaw and Mamaw urge Cash to go to the Connecticut school, as do his aunts Betsy and Mitzi. They want a better life for their orphaned boy. He’s done fine at school in Tennessee but he knows he’s not up to ivy league standards. Delaney, however, is a genius and this is her chance. It takes a lot of chapters to get the two out of Tennessee, but the reader knows it will happen. And yep, it’s rough at Middleford, socially. Delaney excels and the teens find two empathetic friends and Cash finds poetry.

His poetry teacher, who also happens to be from Appalachia, tells him, “Every hurt, every sorrow, every scar has brought you here. Poetry lets us turn pain into fire by which to warm ourselves. Go build a fire.”

Writing poetry, which is brand new to him, helps Cash through the agonizing events of his young life and gives him a direction. As do Alex and Vi, their new friends. This is a story of sweet new love, overcoming devastating hardship, grief, and finding self and family.