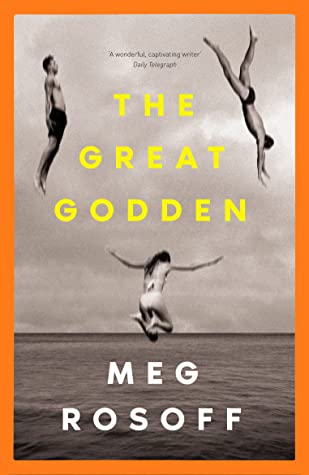 England’s seaside. The teenaged narrator observes acutely—the loving parents; an older beautiful sister, Mattie, who is “in love with her own life”; a younger sister, Tam, who lives at the local horse stables; younger brother, Alex, who studies bats and other wildlife; and a theatrical cousin and her fiancé next door. To this summer mix comes the Godden boys, transplanted from Los Angeles and dropped off by their failing movie star mother.

Hugo is surly and the older Kit Godden seems to Mattie to be a golden god. Our narrator says, “What annoys me most is that it takes no effort to be born beautiful, no hard work, no mental agility, no strength of character. Just dumb luck. And it’s a universal currency, often mistaken for moral superiority.” He is describing both sister Mattie and Kit.

Kit Godden first bestows his attentions on Mattie who is head over heels in love with him. Eventually Kit turns his attention and sexual prowess on the narrator who is of undisclosed gender. This confuses our teenaged narrator.

Kit says, “‘You think I’m a player.’” Our narrator says, “‘I don’t know what you are,’ I said, which was true, ‘and I don’t care.’ Which was not.” The author’s subtlety and spot-on depiction of characters is admirable, to put it lightly.

The brothers, Hugo and Kit, detest each other. In fact, Hugo rarely speaks to anyone. But eventually the narrator and Hugo develop an understanding and through him we learn a bit more about brothers’ relationship. As we discover more about Kit, we begin to appreciate Hugo more. So does our narrator, who says, “Kit’s version of natural was a carefully constructed illusion. I was learning a lot this summer, most of it stuff I didn’t want to know.”

Our narrator confronts Kit about his intentions, almost begins crying in humiliation, then says, “Part of me knew he would take advantage of a genuine emotion to advance his game, and part of me just wanted him so badly that by the time we kissed I had no thought of asking him to stop.” Anyone who feels they have been manipulated in love or in any other realm of living will admire the character/author’s insights.

Kit is getting his talons into just about everyone on the island. And still the ending is a surprise. I highly recommend you read Meg Rosoff’s books. She is perhaps the most insightful, sophisticated young adult author around. And this book is short—small and just less than 200 pages.